Many notable people took part in the fighting at Plattsburgh and on Lake Champlain, with more than a few going on to illustrious careers.  Some of them, not unexpectedly, rose high in the country’s military ranks, including Alexander Macomb, who became Commander-in-Chief of the Army, and John Wool, who later ranked as the oldest general serving in the Civil War.   Joseph Totten, who designed the forts at Plattsburgh, eventually served as the Army’s Chief Engineer.  He also became a Regent of the Smithsonian Institution.

But some men pursued avenues outside of the military once they left battle.  One person present in Plattsburgh during the invasion in 1814 made his mark for contributions to medical research.

Dr. Paolo Fedi will talk about William Beaumont, who serendipitously found opportunity to make important observations in how the human stomach and intestinal tract work.   As a practicing gastroenterologist, Dr. Fedi has named his practice after this pioneer investigator.  He makes use of Beaumont’s information on a daily basis.  He’ll provide insights into the unusual methods by which Beaumont added to scientific knowledge. 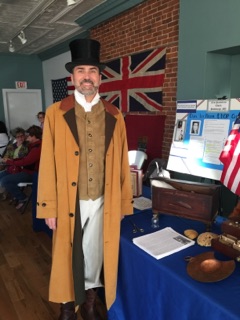 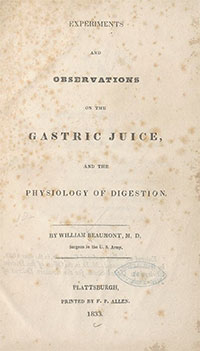 Read the groundbreaking "Experiments and Observations in Gastric Juice and the Physiology of Digestion from the Library of Congress.

Read an account of Dr. Beaumont's life between 1820 and 1834 that includes a small amount on his earlier life and service at Plattsburgh during the War of 1812.

Read about the artist, Dean Cornwell, who painted the scene of Dr. Beaumont with Alexis St. Martin featured in Dr. Fedi's video.